The first meeting of the group that became Les Marmitons of Canton took place on a sunny Sunday afternoon in November of 2007 in J. P. Jobin’s back yard. Approximately 20 guys, sporting a strange collection of

aprons, gathered to hear about a mens’ cooking club that had chapters in several Canadian cities, some in the U. S. northeast, and two in the Atlanta area. We met Ron Seiberling for the first time and he was decked out in full Les Marmitons gear, and telling stories of past dining and wine drinking events with our host, J. P.

Everyone there agreed that it sounded like something they wanted to be a part of and the process to become a chartered Les Marmitons club began.

Under J. P.’s leadership and with the sponsorship of Ron Seiberling and the Atlanta chapter, we began holding monthly meetings. We learned that we had to have three official gatherings before we could be recognized and that we had to have an established board of directors. All of that was accomplished over the next four months and the Canton Les Marmitons chapter was officially recognized at a gala joint cooking event at the Chattahoochee School. Members of our chapter joined members from Atlanta and accompanied by our wives, we celebrated our induction into the International organization on March 11, 2008.

The initial Board of Directors was as follows: 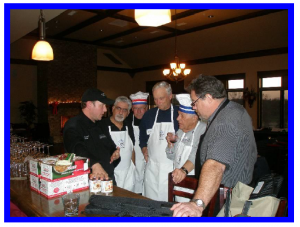 Our early cooking events were held at the Chattahoochee Technical College (CTC) kitchen under the supervision (and it was truly supervision) of Chef Michael Bologna, the executive teaching chef at the school and a good friend of Les Marmitons, both in America and Canada. Our first cooking event was an eye-opener for us and the chef. Many of our members were, to be generous, not overly experienced in the kitchen (any kitchen). And to suddenly be exposed to the stainless steel wonder of Chef Michael’s kitchen and his drill sergeant manner was a bit intimidating. Chef Michael, on the other hand, was openly amazed at how long it took us to do anything. At our first event, he had a white board posted with estimated times for completion of various course preparation tasks. After about an hour into the prep work for the evenings’ menu, someone asked the Chef if he was concerned that we were well past the estimated time for several of the initial preparation tasks. He calmly replied, "No, but I am considering changing to a breakfast menu". Nevertheless, we all learned a lot and somehow, the meal was cooked and eaten and a good time was had by all. 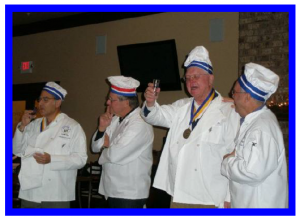 January of 2008 marked the first time most of us experienced the task of selecting a menu from a tasting menu prepared by a chef. About fifteen members of the club ventured to Marietta to a small Caribbean restaurant owned by Chef Harry Lorius. Accompanied by several bottles of wine, we tasted a number of spicy Caribbean and Haitian dishes prepared by Chef Harry and voted on which ones we’d like to prepare. Later that month we gathered for the cooking, again at the CTC, this time under Chef Harry’s supervision. Big difference!! Where Chef Michael was specific and demanding in the manner in which things should be done, Chef Harry was the epitome of laid back. His standard answer when asked a question was either "whatever you think" or "it sounds ok to me, mon". This fairly complicated menu got done and was pretty successful but most agreed that the dishes weren’t quite the same as when they were prepared by the Chef at his place.

In February, we experienced our first cooking event at The Tavern with Chef Carlos Amavizca who had recently come to The Tavern from the Winchester Grill. Chef Carlos put together a terrific menu consisting of marinated scallops, miso soup, grilled tuna, wasabi mashed potatoes and cherry turnovers. This was a very successful event although cooking in the kitchen at The Tavern was quite different from the spaciousness of the kitchen at CTC. The cooking event in March was the joint event with Atlanta where we were officially inducted into Les Marmitons International. The highlight of that menu was the surprised looks on the faces of most of our wives when they learned that one of the courses was Thumper (rabbit). 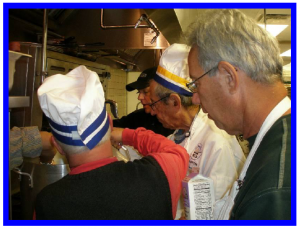 In April we were back to the Tavern with Chef Carlos and another very enjoyable menu consisting of ceviche, a sombrero salad, braised short ribs, Mexican rice and refried beans and a wonderful flan made with Patron XO. Christie Martinez, the GM of The Tavern and a great friend of our Les Marmitons chapter, added greatly to the fun by mixing and serving a number of tequila-based cocktails.

We cooked again with Chef Carlos in May, this time preparing a menu consisting of a Greek salad, grilled chicken and artichoke soup (a real winner), lamb chops with a balsamic and Cabernet sauce, cous cous with grilled asparagus and baklava with pecans. While the kitchen at the Tavern was really not built for the kind of team cooking we do, cooking with Carlos is always fun and he always comes up with really wonderful menus which often translate well to home preparation.

In June, the board gathered with their wives in the Jobin’s back yard for a delicious fish fry put on for the club by new member Vern Clark and his wife. The food was terrific, the beer and wine flowed freely, and as they say, a good time was had by all. One of the highlights of the night was the recognition and toasting of the approaching marriage of fellow Les Marmitons and Sommelier Steve Bloom and his fiancée, Judy. The other highlight (?) was the impromptu entertainment provided by Carrolle and Brenda who wowed the crowd with their rendition of a number from the hit musical, Chicago, complete with props and astounding choreography.

June was also the month several of our members and their wives attended the International Event sponsored by the Cranford, New Jersey, Les Marmitons chapter.

There were no organized team cooking events in July and August but the club did enjoy an outstanding barbecue supervised by Dan Casey as we continued to enjoy the use of the newly opened Seasons clubhouse. 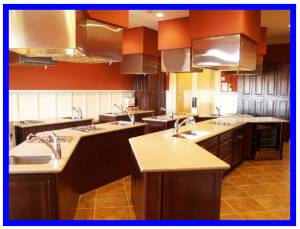 We reopened the cooking season in September with an event at The Tavern overseen by Chef Hillary Gallagher whom we knew from the CTC. Hillary put together a challenging menu that our cooks pulled off extremely well. We began with shrimp with gazpacho sauce and grilled country bread, a cod salad with white beans and radicchio, baked lemon chicken, whipped potatoes with caramelized onions, arugula salad with shaved Parmesan and a dessert of ice cream cookies made with ginger snap cookies and Guinness-flavored ice cream. (Editor’s note: use care in preparing the gazpacho sauce – it causes your blender to malfunction.) Also in September, several members and their wives traveled to New Orleans for a Les Marmitons sponsored culinary tour. The event which raised money for the International organization featured two cooking events, a walking tour of French Quarter restaurants, and a night of dining Cajun style complete with a Zydeco band. 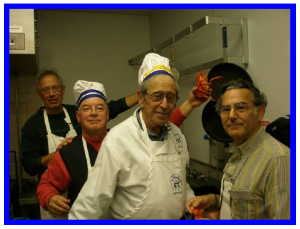 In October we met a new chef, Chef Lauri Grizzle, formerly chef and owner of a restaurant in Ballground called The Mustard Seed. Chef Lauri actually came to the Tavern twice in October, once to cook a tasting menu for us and again to supervise the cooking of the dishes we selected to prepare. This was another excellent menu. We cooked a creamy potato chowder, green salad with toasted pecans, beef tenderloin with a horseradish cream sauce and a chocolate mousse for dessert.

November brought still another new chef, Chef Zach Kell. Chef Zach is the owner and operator of a popular downtown Canton restaurant, the Downtown Kitchen, and has recently opened a second operation in Canton known as Goin’ Coastal, a restaurant that specializes in preparing and serving renewable products. A group of Les Marmitons gathered at Goin’ Coastal the first week of November to sample some of Chef Zach’s offerings and to select a menu for that month’s cooking event. We settled on lobster bisque, blackened shrimp with fried grit cakes and roasted corn salsa, dry aged Kansas City steaks with horseradish whipped potatoes, and Krispy Kreme Donut bread pudding for dessert. No cooking event was held in December but members and wives gathered at the Seasons Clubhouse for the first annual Les Marmitons holiday party. Main courses were prepared by club members and all attending brought side dishes, salads, appetizers and desserts.

The club continues to grow and we look forward to 2009 as we plan new cooking events with new chefs. Our first cooking event in our Clubhouse kitchen is scheduled for January. Already plans are being made to attend International events in Quebec City in June and another fund raising trip in the fall in the form of a cruise along the northeast coast from Boston to Halifax. 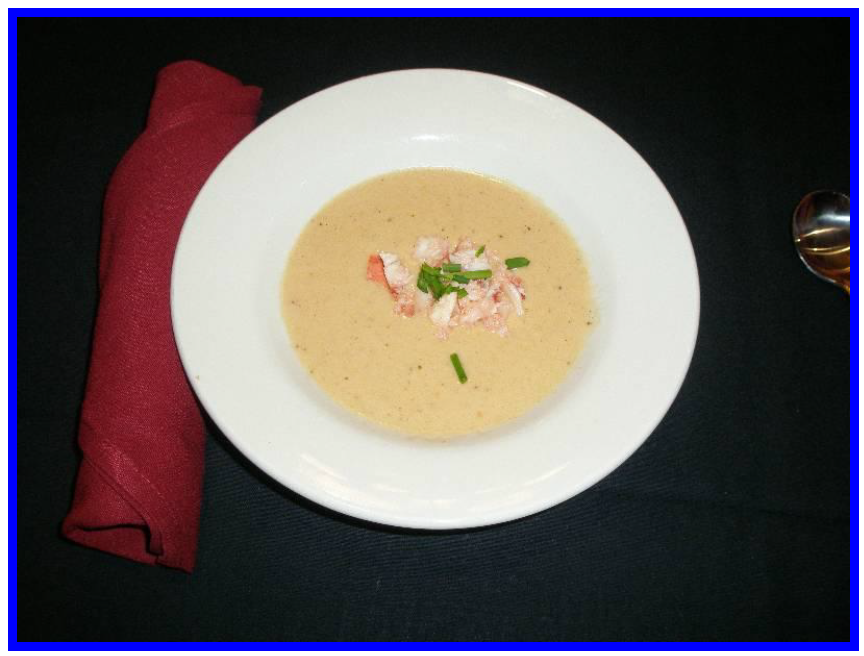 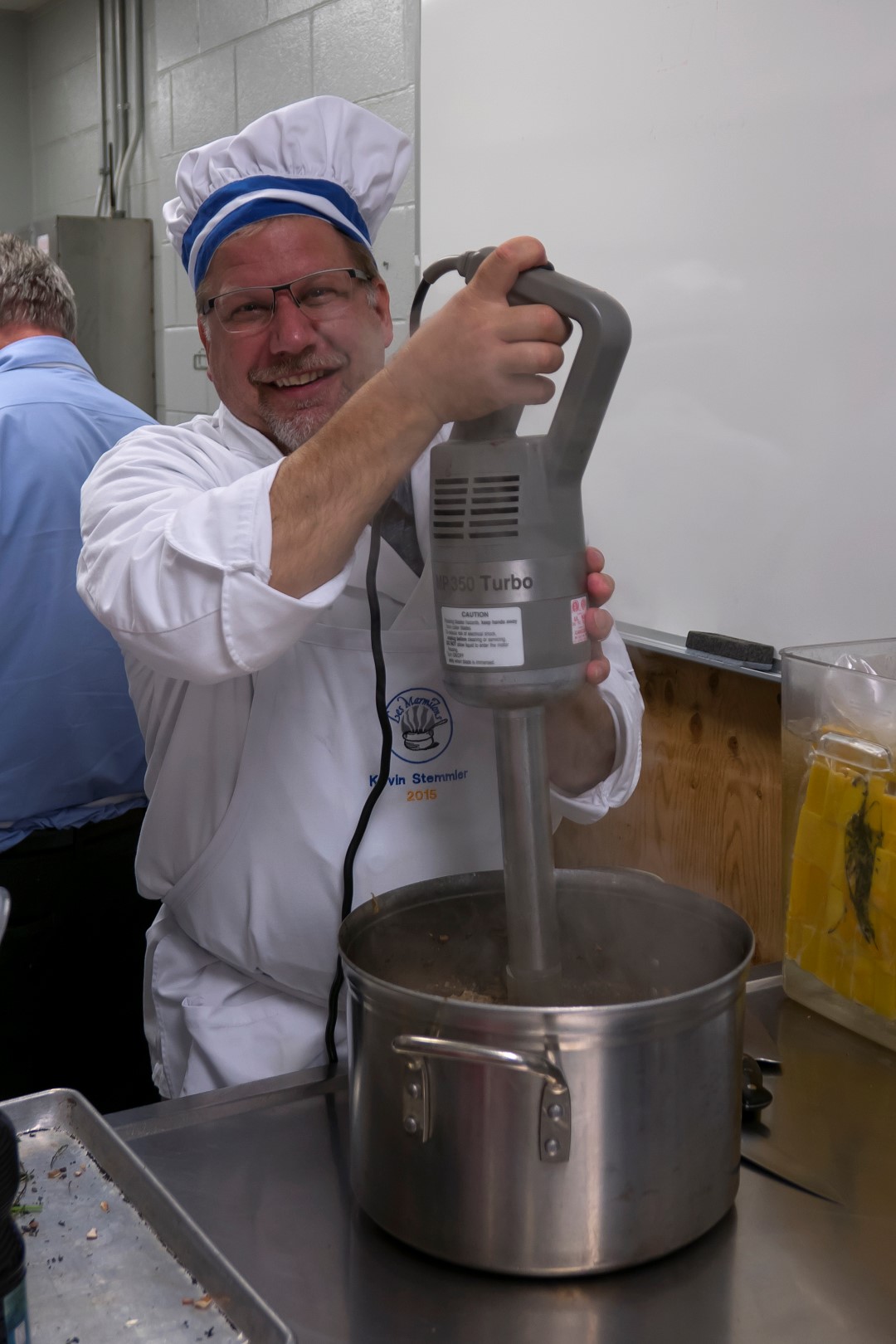 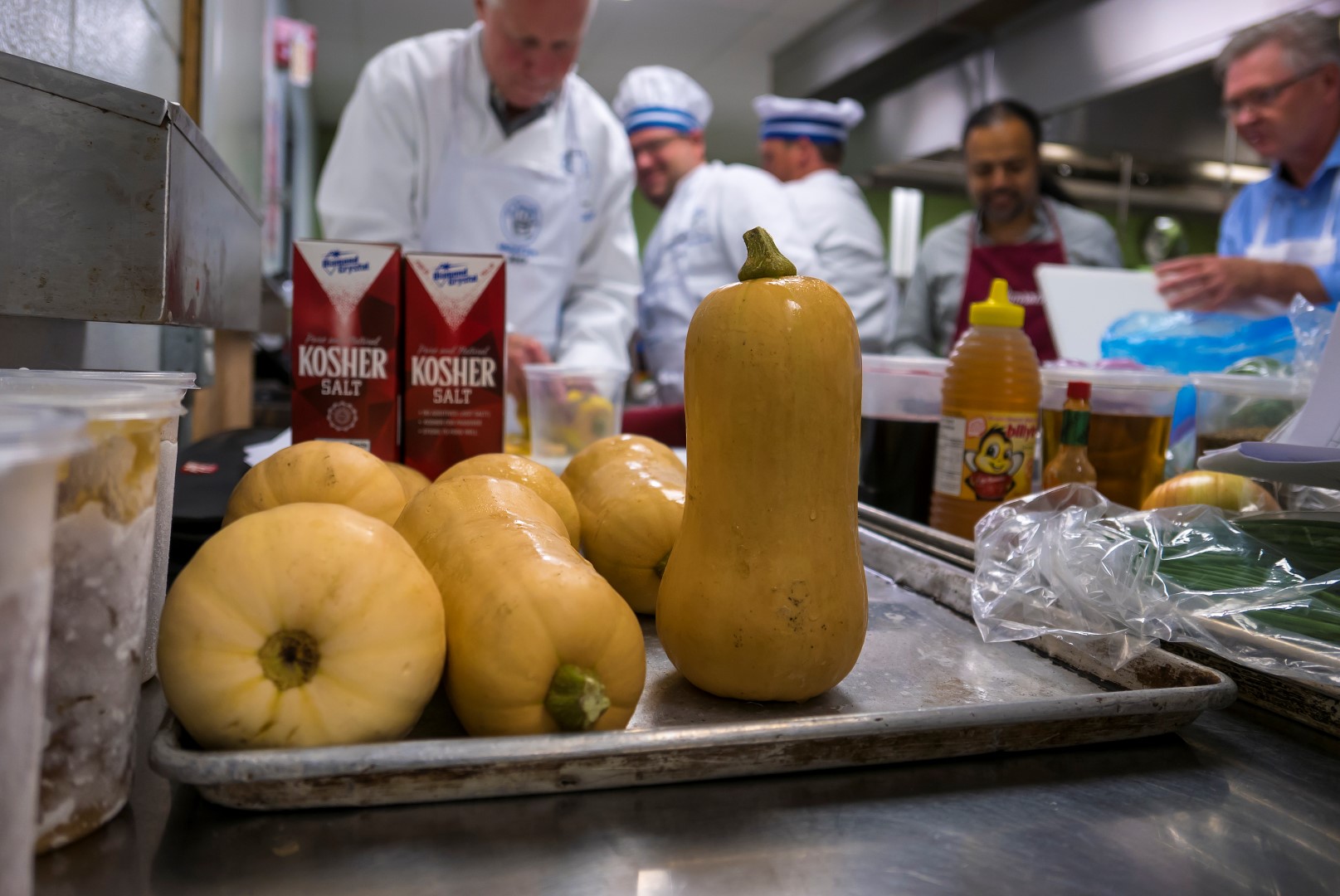